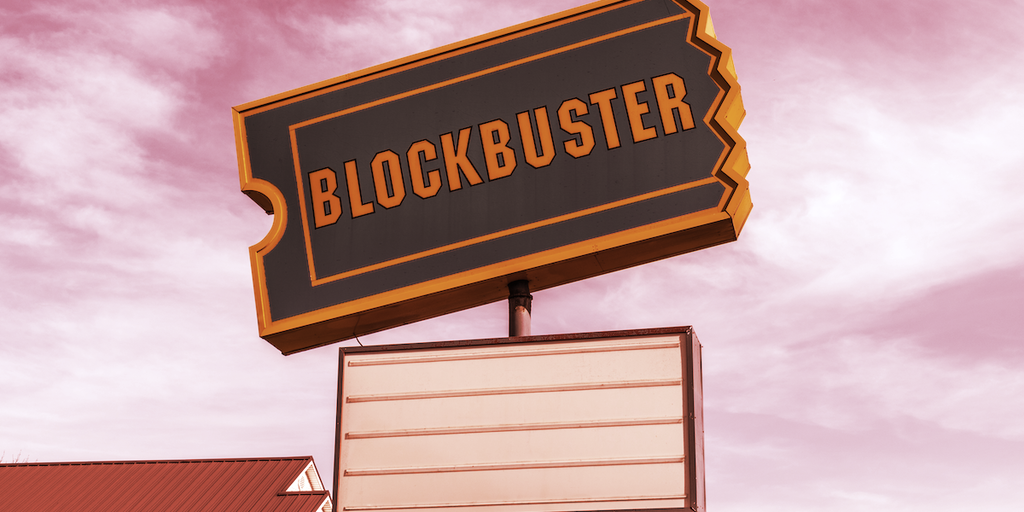 BlockbusterDAO sought to buy the legacy video store IP, but said this week that owner Dish Network refused to sell it to a DAO.

The team will continue building a Web3 streaming video and commerce platform under the new name, R3WIND.

BlockbusterDAO is another project that launched around the same time to ample media buzz, as the collective aimed to raise $5 million through NFT sales to acquire the near-defunct Blockbuster Video brand from current owner Dish Network.

On Wednesday, the core team behind BlockbusterDAO announced that after months of meetings, negotiations, pitch decks, and legal consultations, Dish Network allegedly decided that it didn’t want to hand over the Blockbuster IP rights, which it purchased out of bankruptcy for $320 million in 2011—to a DAO.

“There was definitely a real shot at making this happen,” pseudonymous BlockbusterDAO steward Gugz , who said he’s a television and film producer, told Decrypt.

At the end of the day, I think it's just that the two visions weren’t aligned.” In a blog post , the BlockbusterDAO team described in detail the process of pitching Dish Network on its plans and working through multiple scenarios, including the potential creation of a limited liability corporation (LLC) co-owned by Dish that would be progressively decentralized over time.

Ultimately, according to the BlockbusterDAO team, Dish Network gave the final verdict on May 31, allegedly claiming that it “did not want to license the brand to a DAO.” Dish Network representatives did not respond to multiple inquiries from Decrypt.

“Although we were disappointed, we understand their point of view.” The most prominent goal of the planned DAO community—acquiring the Blockbuster brand—has been dashed.

An apparent nod to Blockbuster’s “Be Kind, Rewind” slogan from the VHS era, R3WIND is envisioned as a creator-friendly platform that’s described as “Vimeo meets Shopify with best-in-class organic marketing.” Users will be able to upload or import videos and then tie them to storefronts with NFTs and physical merch alike, with the platform governed by a DAO community of token holders.

“We feel incredibly validated by the mission that brought us together, which was creating a decentralized streaming service,” said pseudonymous BlockbusterDAO founder, Tasafila , who said that he’s an entrepreneur who works in e-commerce.

“What great startup doesn’t have a few good pivots in them?” The R3WIND members pointed to pain points for creators in current centralized video platforms.

We’re an incredible team, and we’re going to build a product.” BlockbusterDAO is officially no more, with R3WIND branding taking over its social channels alongside the announcement of the pivot on Wednesday.

“That was one aspect to our story,” said Tasafila of the Blockbuster initiative, “and probably, mostly, a thing of the past.” Wherever R3WIND ultimately goes from here, it’s likely to carry that shadow of the potentially brief era in which DAOs sprung up with grand—and in some cases, perhaps overly ambitious—aims to collectively own and operate things.

“When we started out, especially when you look at the news coverage, it was hard not to kind of lump us into the ‘meme DAO’ box,” Tasafila admitted of BlockbusterDAO.

“The story was very meme-ish, and it gained a lot of incredible traction.” Despite the stated $5 million funding goal, Tasafila and Gugz said that BlockbusterDAO never raised a dime.

The core team was still trying to convince Dish Network to sell the IP over the past months, all while developing the premise behind the planned Web3 video platform.

“We just didn’t want to be the group that was taking people’s money at a time when we did not know how to spend it.” As R3WIND, the contributors suggest that they’ve evolved past the “meme DAO” label, and that they’re serious about building a Web3 streaming video platform.